A Kindergarten Classroom, Minus the Color 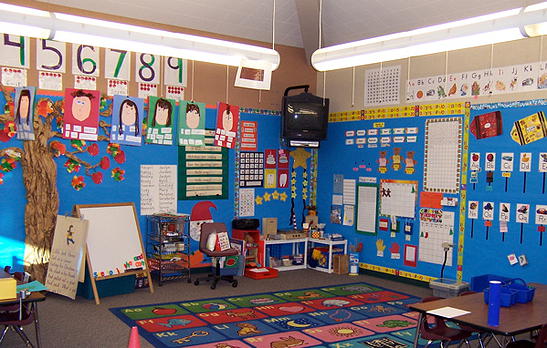 You remember kindergarten, right? A smiling teacher, excited classmates, and bright, colorful artwork decorating the walls?
That colorful decor  has become the norm in classrooms across the country.
A new study looked into whether those decorations encourage, or actually distract from, learning. The study found that when kindergartners were taught in an extremely decorated classroom, they were more distracted, their gazes more likely to wander off task, and their test scores lower than when they were taught in a classroom that was more plain.
The researchers, from Carnegie Mellon University urged educators to establish standards when setting up their classrooms.
Younger school children have to learn to focus their attention and concentrate on a task. As they grow older, their focus improves.
But could bright and cheery kindergarten classroom walls, meant to inspire,  instead be overwhelming? Some experts seem to think so.
For the new study, 24 kindergartners were taught in two classroom settings: one plain, the other festive with colorful materials like posters and maps, as well as the children’s artwork. The children sat  facing the teacher, who read aloud from a picture book. They took six five- to seven-minute science lessons over two weeks. After each lesson, the children took multiple-choice picture tests. The lessons were videotaped, to monitor how often the children’s gazes wandered.
In the plain classroom, the kindergartners were likely to be distracted by others, or even themselves. But in the decorated one, the visuals competed with the teacher for their attention. The children spent far more time off-task in the decorated classroom than in the plain one, and their test scores were also lower.
The researchers noted that their study looked only at a small group of kindergartners, and that its results may not apply to older children. Also, the students sat in the rooms for one lesson at a time, rather than a full school day.
What do you think? Would kindergarten be the same without those colorfully decorated walls?

What to Do When Friends Become Enemies

Sometimes people write to me with random questions and share stories and ask for advice. A couple weeks ago I received an interesting one...

How to Make New Friends and Not be Awkward Doing It